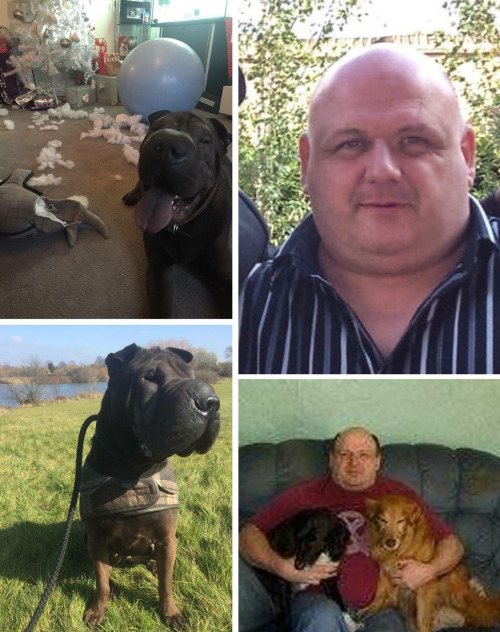 #WallofShame Michael Porter, 52, of 22 Fuller Rd, Dagenham – starved a Shar-Pei in his care over several days before attacking him with a pole and a knife; neglected his own tumour-riddled border collie, who was found starved and dying at his house; smirked throughout his appearance in court
Sentence: to follow on 27 April at Barkingside Magistrates’ Court

Porter hit brown Shar-Pei Sam with a pole and seriously injured him with a machete-style knife on 14 September 2015. The attack was witnessed by a horrified neighbour who banged on the window to stop Porter.

The judge told the court: “He [the witness] said you were saying you wanted to kill the dog because it had bitten you.”

Porter denied carrying out the assault and said he had punched Sam in self-defence after the dog had clamped on his arm. But the court heard yesterday how three thick black lacerations found near the dog’s jaw were consistent with knife injuries, not punches. Porter had a small scratch on the arm that he alleged was bitten.

Porter, who was looking after Sam for relatives for a two-week period, was found guilty of causing and failing to prevent unnecessary suffering of an animal. He was also found guilty of not ensuring the welfare of the pet, who put on 2kg in just 13 days when he was taken to kennels after his ordeal.

Prior to the trial, Porter pleaded guilty to a fourth charge of not ensuring his own pet Candy’s welfare. He failed to take the female border collie to a vet, despite the fact she was clearly in pain and was found to have several tumours. The dog, who was found collapsed on the kitchen floor, had to be put to sleep to end her suffering.

Porter smirked at Sam’s distraught owners as an animal welfare officer described details of their pet’s injuries to the court. Sam suffered deep cuts to his mouth and muzzle, which required stitches, as well as lacerations to his ears. Already wary of people, the unprovoked attack has left him fearful and nervous.

Porter will appear for sentencing at Barkingside Magistrates’ Court on April 27.